Wednesday was yet another glorious sunny day. I love this weather and I'm definitely not looking forward to returning to grey skies and rain in England in just a days’ time.

Making the most of the hours left, I started preparing my luggage for the journey home, then went back to the optician with Rajshri's younger brother Monty to collect my smart new specs. Monty had been such a great help to me during my stay, available at a moment's notice whenever I needed assistance and acting as interpreter and driver with such warmth and friendship.

In the afternoon, I was collected by my other former Facebook friends Girdhar and his son Yashoraj, both very keen photographers and wildlife lovers whom I'd met on my visit to Jaipur in 2016. Today was to be another journey of discovery in their affable company – Jhalana Forest.

The Jhalana area is an extensive nature reserve spread over 33 sq. km. east of Jaipur city, just half-an-hour’s drive from my hotel. It's said to hold more than a dozen leopards, as well as a wide variety of other wildlife and birds. Formerly a public recreational area, it has only recently become a designated wildlife reserve (or a 'safari park' as it's become known) with limited and chargeable entry. There are currently three prescribed routes in the forest with scope for more as demand increases. There's also a temple within the reserve, which means that, somewhat disconcertingly, there are often people wandering along the paths while you drive past in search of leopards that have been known to seek shade on the temple steps! 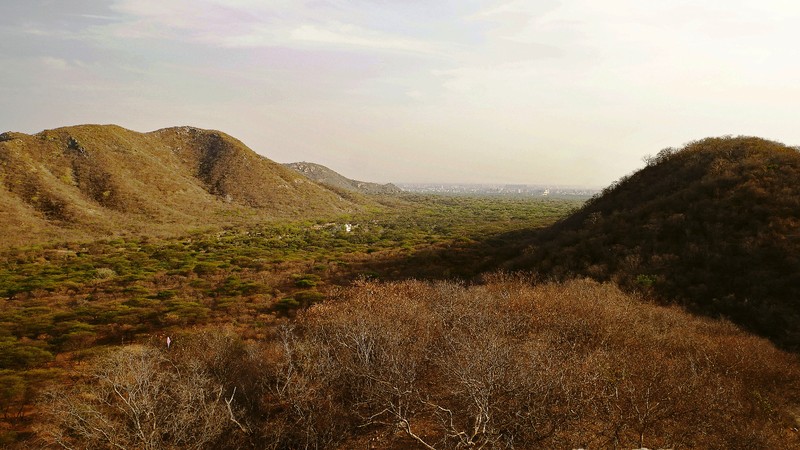 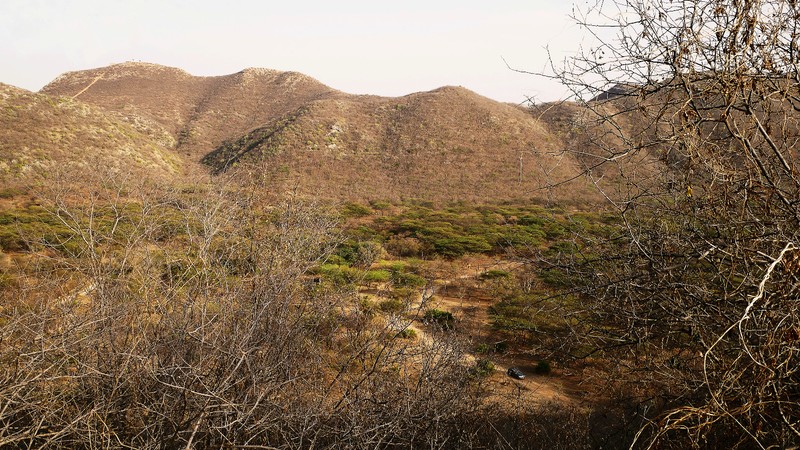 I was forewarned that there was unlikely to be much chance of a leopard sighting in the increasing heat of this time of year. The best possibility might be at what Yashoraj referred to as 'high-ISO time' - a reference to sundown being the optimum time to see them and the need to adjust camera exposure settings to compensate for the consequent poor light.

This is another of the places to which Lajpal’s father-in-law, Dashrath, has privileged access. For unknown reasons, related perhaps to a rather confused leopard being seen a few days ago close to nearby houses and shops, the general public weren’t currently permitted to take their vehicles on ‘safaris’ inside the protected area. Girdhar and Yashoraj are well-known to the reserve's senior officers and we may not have needed special entry permission, but Dashrath had made arrangements through the Minister's office to guarantee access to the area for us all. He came along too, accompanied by the Minister’s personal manager for good measure.

It was still mid-afternoon and very hot when we arrived at the reserve's entry point. After enjoying masala chai served by one of the officers, we all piled into an official jeep complete with Ranger and another wildlife officer and off we went at a steady slow pace around the sandy and stony tracks inside the reserve.

We were extremely fortunate to spot our goal, a leopard, after only a short while – a male, concealed beneath bushes about a hundred metres away. At first reluctant to make an appearance, he eventually moved off, crouching low among long grass before sauntering off into the distance watched by a small flock of nervous Indian Peafowl.

It was a good (but far from great) sighting. It was still early on this hot afternoon and, in any case, the leopard is one of the most secretive of all wild cats, so difficult to see at the best of times. 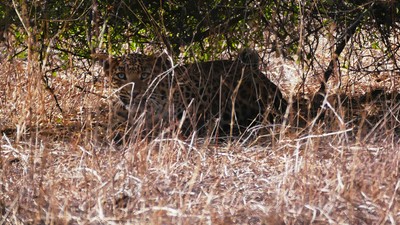 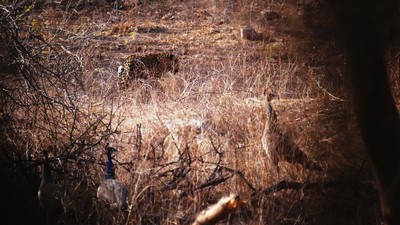 Although we were delighted to see numerous Nilgai antelope - ideal food for leopards, a Mongoose or two and a Eurasian Sparrowhawk bathing in a waterhole, we drew a blank on the next few circuits as far as leopards were concerned. 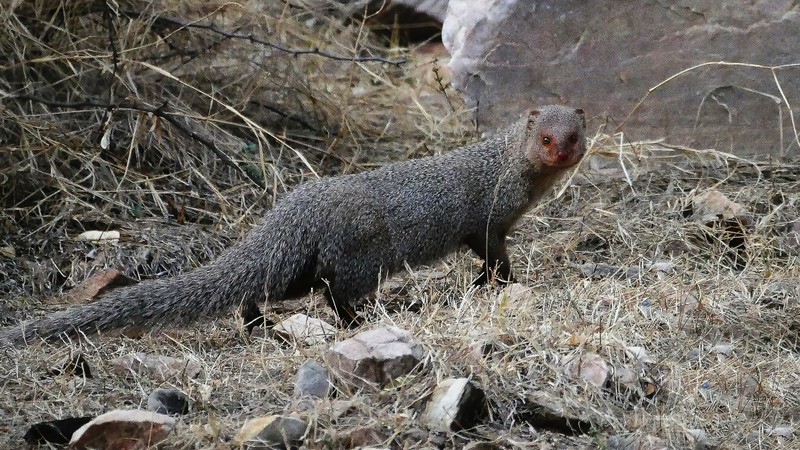 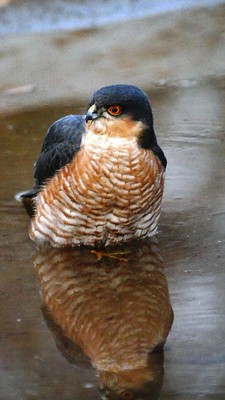 We took a break while the temperature subsided, stopping for tea and biscuits on the flat roof of an ancient, deserted hilltop fort, complete with tables and chairs – very civilised (and not something anyone could do without being in the company of the reserve's boss!). 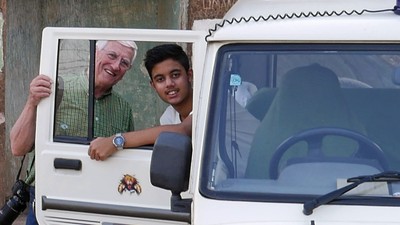 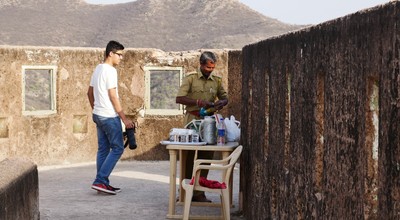 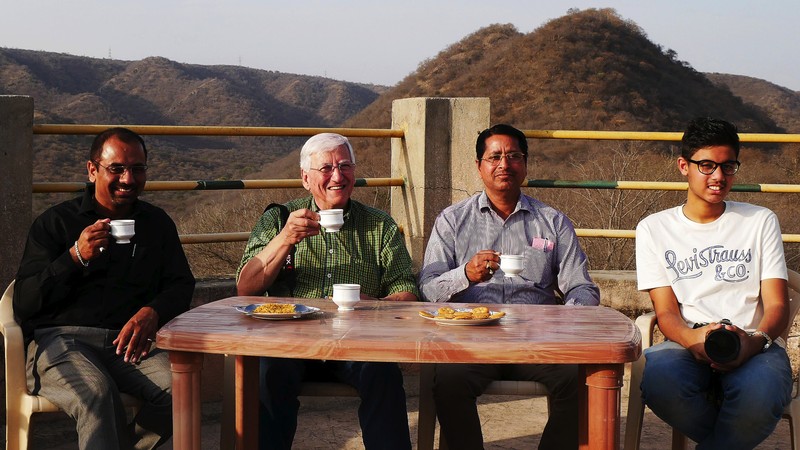 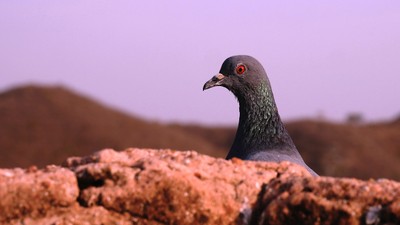 Common Pigeon - Photographed, using my camera, by Girdhar - who clearly has a sense of humour!

Alerted by a mobile phone call from another authorised vehicle, we left the fort and drove as quickly as the terrain would allow to a place where a leopard had been spotted near a waterhole. Disappointingly, it had left by the time we arrived.

We continued driving slowly, scanning the trees and bushes all the while for any tell-tale signs. Then, receiving another phone tip-off, the driver shifted into top gear and, with us holding tight to the grab handles, he hurried along the winding sandy road, twisting and turning through gaps in trees.

At this new location, we were just in time for a very clear view of a female leopard relaxing on a small ridge, obscured only by a few wispy branches of nearby trees. We were not alone for this close view – there were several other keen photographers there, regulars with special permission, most with big cameras and even bigger lenses clicking like machine guns. I was introduced to a man I recognised as a person I’d followed on Facebook for some years. He’s one of India's leading leopard specialists, who regularly visits this reserve and has taken some remarkable photos as a result.

My friends Girdhar and Yashoraj are frequent visitors too – apart from knowing most of the leopards by name, Yashoraj has taken some truly great shots of them. When I met him last year, he was passionate about birdlife and could easily identify species, both on sight and by their calls too. This had now switched to an even greater passion for leopards and a close study of their behaviour, their habitat and even locations they frequent within the reserve.

Most of the leopards seen in the reserve have names - Yashoraj recognised this one immediately as ‘Katrina’ - the name he had given her and by which she was now formally known. She remained unfazed by our presence for a good ten minutes or more, initially facing away from us, but then moving to watch us curiously before eventually slinking off over the ridge and into the bushes. What a fabulous sight and a remarkable end to my journey of discovery! 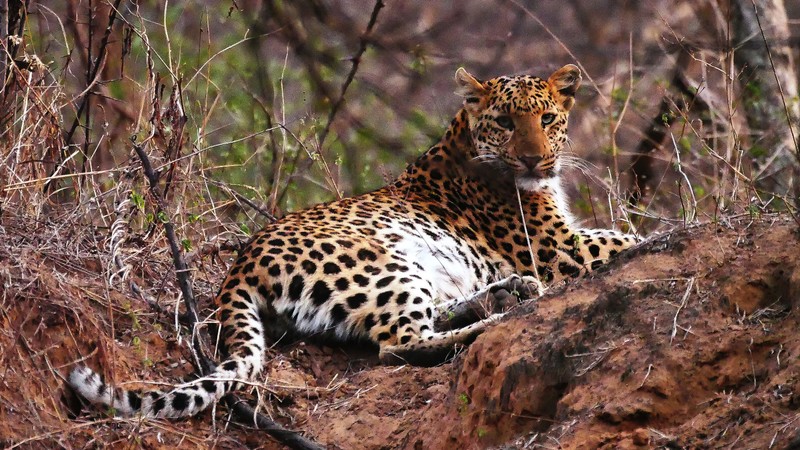 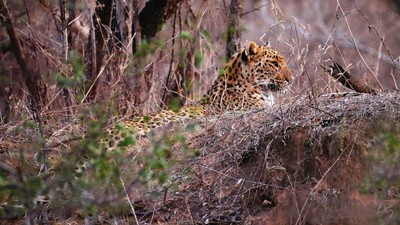 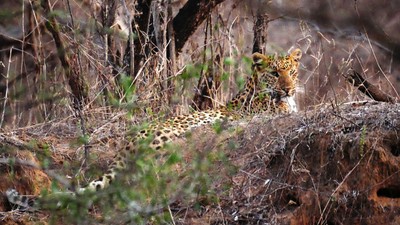 Elated at having had such a good sighting - and in relatively good light just before sunset too, we called it a day and returned to the reserve headquarters. There, we boarded Girdhar’s car and I was delighted to be invited to come to his home for a light meal before being dropped back at my hotel.

It was a great pleasure to meet his wife and some of the children of his brother, who also lived in this large house in an important suburb of the city. It was also a interesting to discover their royal connections - Girdhar is the son of the Maharaja of Khandela, a town to the north of Jaipur, where his former stately home has been converted into a heritage hotel. Their 'haveli' (mansion) in Jaipur is also now a hotel, supervised by Girdhar as part of varied business interests.

We shared some interesting conversations about my favourite country and about our quite different lives, before parting with a promise to meet again soon. Much of my fondness for this country revolves around the warmth of its people, this lovely family being just one illustration of the genuine and unexpected hospitality I have experienced here throughout the years.

It’s always sad to leave friends. I have so many of them in Rajasthan after this, my 11th visit to India. I’ve phoned or messaged them of course to say farewell and to thank them for giving so freely of their time, but I repeat my gratitude here for public consumption.

To all my friends in India, I say: by the grace of whichever of your many gods receives your devotions, we will surely meet again in this life. Until then everyone, remember: muskaraate raho! keep smiling!

Wow Mike amazing you seen the leopards! Amazing photos! Not been on this site for a while and been good to read about some of your travels again. I hope all's well with you and your family. I'm going to Beirut next month so will write about that!

What wonderful leopard photos! I envy you this sighting - our only glimpse, when staying in Narlai, was much more distant and almost impossible to photograph.