It's a long way to Tip a Rary

The title of this blog arises from something I once heard on a BBC radio programme. The name of the programme escapes me, but it came to mind while waiting for my flight to Mumbai. In that programme, celebrities were secretly given a phrase or saying and had to concoct a long and elaborate story for the rest of the panel to guess what it was before the tale was finished.

The story in this case went something along the lines of:

A man found a tiny bird, the like of which he'd never seen before. It was clearly sick, so he took it home and nursed it back to health. He searched everywhere to find out what sort of bird it was, but it seemed so rare that he couldn't find it mentioned anywhere. So, he named it a Rary.

The little bird made no noise, but it ate an enormous amount of food. Soon, it was the size of a very large (but silent) dog. The man tried to set it free, but it didn't want to go - and it was now too big to fly. When it had reached the size of a small car, the exasperated man rented a lorry and drove the bird to the high sea cliffs at Beachy Head.

He reversed the lorry up to the edge - at which point the bird looked despondently at the man and, for the first time in its life, sang out: "It's a long way to tip a Rary..."

In the Plaza Lounge at Heathrow's Terminal 4, while waiting for my call to the departure gate, I noticed a sign above the copious dinner buffet with a quote from JRR Tolkien that said: "If more of us valued food and cheer and song above hoarded gold, it would be a merrier world."

I was certainly valuing the free food and wine, while background music cheerfully played a miscellany of First World War songs, including - you’ve guessed it - 'It's a long way to Tipperary'.* Hence the story... Apologies!

So, here I am in Udaipur. It is a long way to go (more than 5,000 miles from London via Mumbai to be precise) and it’s also a long way from ‘the sweetest girl I know’ (my wife, Pat, who isn’t a fan of India). However, it’s definitely not a tip - it's a beautiful city, set on lakes with one of the world's top hotels on an island in the middle. There's a magnificent royal City Palace too, fascinating temples and so many shops it would take a lifetime to see them all. I’ve been here several times before, most recently with the Grey Haired Nomads in 2013 and on the way to a very special occasion in 2012 . It hasn’t changed a bit. 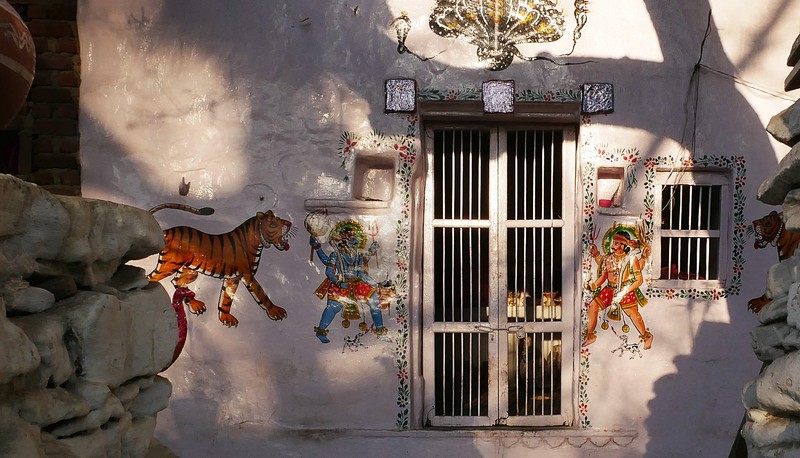 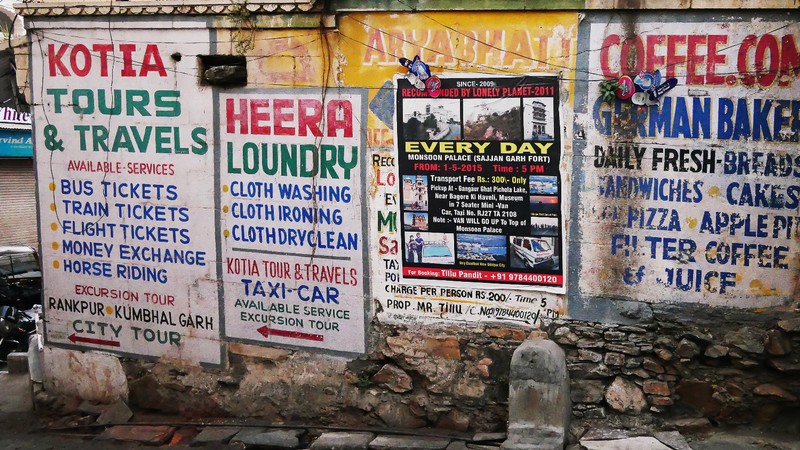 Inevitably, I’ve done most of the tourist sights, so this time I decided to take a dawn walk to see what there was to see on the lake-shore opposite my hotel, the Jaiwana Haveli. On previous occasions, when I’ve stayed here and at another haveli close by, I have always admired the view of the shoreline opposite, but never had time to venture closer to it.

So, this morning, before the sun rose above the palace, I wandered down to Lake Pichola, discovering a footbridge tucked away down a deserted side street, which took me to that opposite bank. Along the way, I met a few early-risers, who greeted me with a cheery ‘Namaste’, saw flocks of pigeons being fed beside Gangaur Ghat (a religious bathing place), women washing clothes, and children in school uniform waiting for their transport. I met only one other tourist, a young American woman enjoying the view from the footbridge. 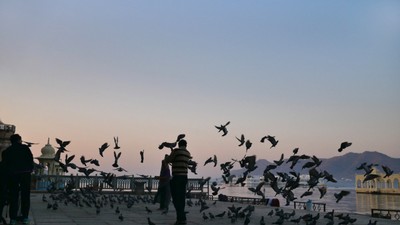 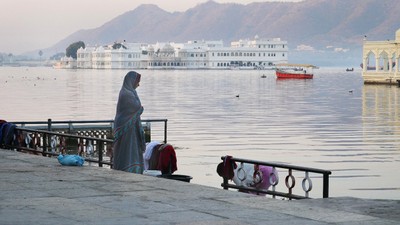 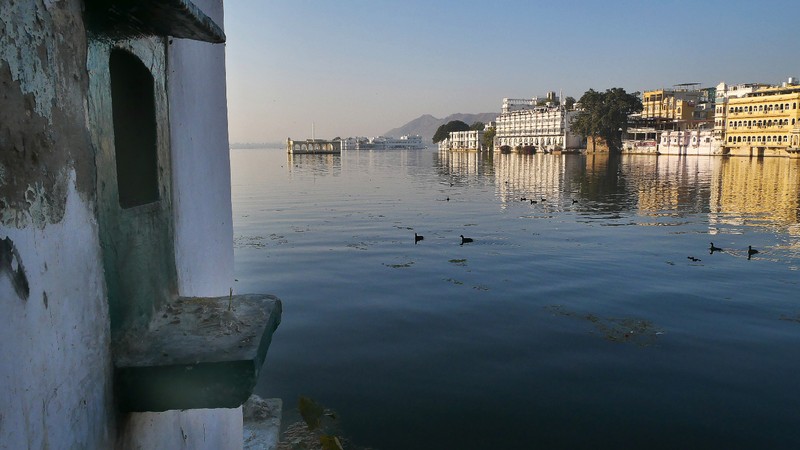 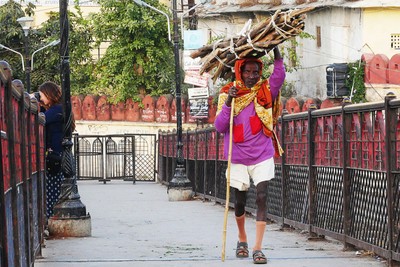 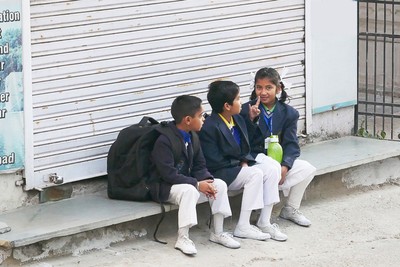 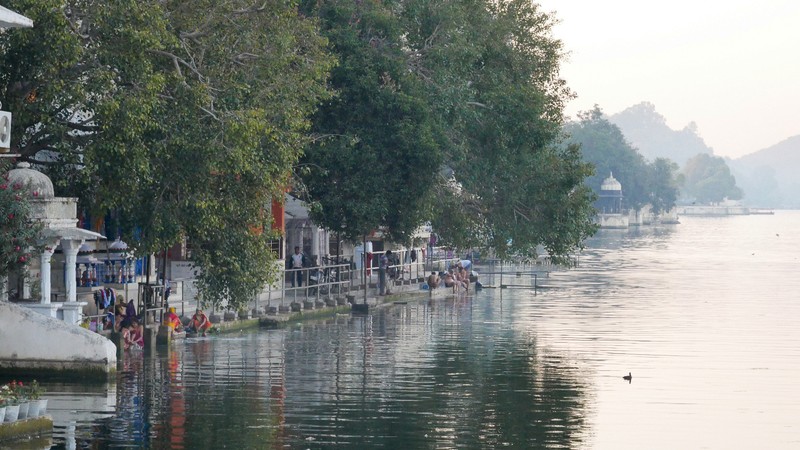 On the far bank, passing a tiny temple and watching the sun's rays glowing on neighbouring buildings , I reached a ghat where men were cleaning their teeth and themselves in the cool waters of Lake Pichola. Others promenaded around a small garden as part of their morning fitness regime, jokingly inviting me to join them. 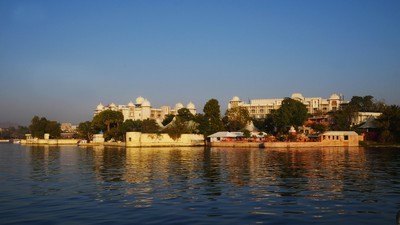 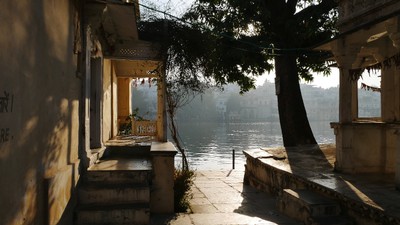 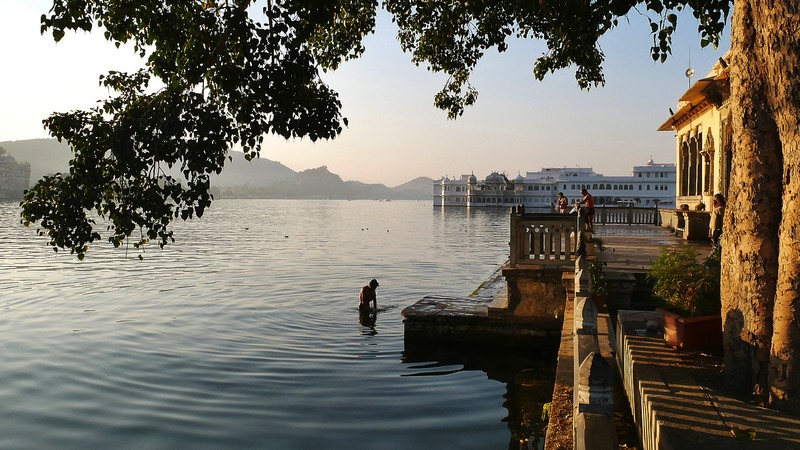 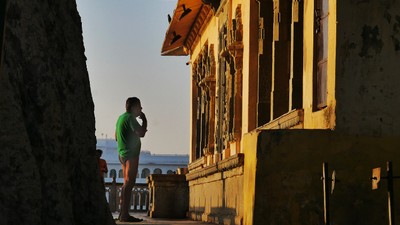 I enjoyed fabulous views of the sun rising behind the City Palace and the gleaming white Lake Palace Hotel with the verdant hills amid the early morning mist beyond. 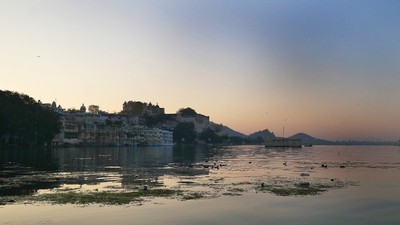 Returning to the hotel, I enjoyed breakfast outdoors in the rooftop restaurant with a similar but more expansive panorama. Oh, I could never tire of that view. 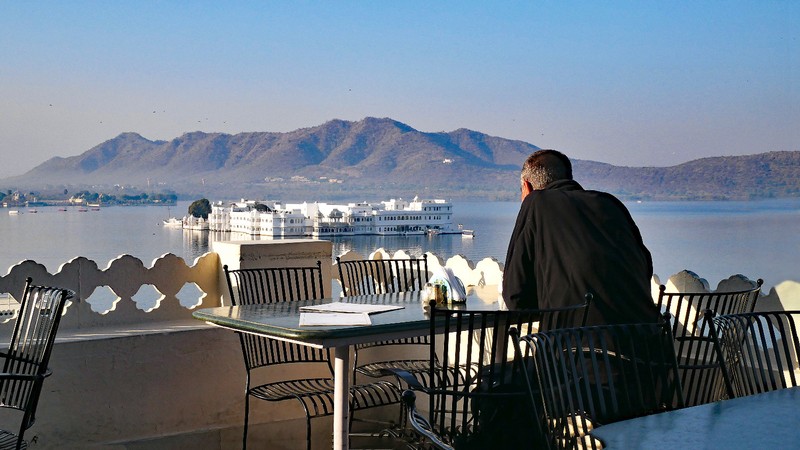 Then, just a few hours later, I was joined by my dear friend Lajpal, who’d driven here to collect me for our week together. After a snack lunch on the hotel’s rooftop, we took a stroll beside the lake and had a cup of ginger and cardamom masala chai in the warm afternoon sunshine – I needed the Vitamin D after a dreary winter at home.

This evening, we had dinner at a friend’s restaurant, The Vintage Lounge, a few miles away with a terrific night-time view over Lake Fateh Sagar and the illuminated buildings around it. It's wedding season here in India, so there were some big fireworks in the inky black sky too. I was particularly pleased to be joined by Lajpal's cousin, Chottu. We hadn't seen each other for five years.

Today, we're driving north to Lajpal’s home in Sadri, where his wife and daughter are staying with his parents, and where we’ll spend the night. If time permits, we’ll stop off en route to see a hotel owned by another of his cousins amid lush gardens in the Aravali hills near the ancient fort of Kumbalgarh. Lack of internet connection for the next few days will mean a delay in publishing my next blog, but be prepared for news of my adopted Indian family, leopards and excavations of ancient cities.

*Colleagues from my previous life will know this better as ‘It’s a Long Way to Taormina – same tune, different words. I often wonder what happened to Stan Way! 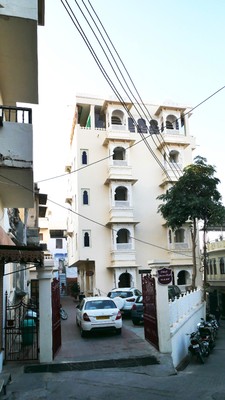 I stayed, for the second time, at Jaiwana Haveli in Lal Ghat, within easy walking distance of the City Palace, Jagdish Temple and a landing stage for boat tours on the lake. I heartily recommend it.

It's not only well-situated, but it's well run by a friendly family and provides excellent accommodation at reasonable rates. It offers good facilities, including a rooftop restaurant and a coffee shop on the ground floor. Food and service are very good indeed.

The WiFi is sometimes good in the public areas, but is not provided in the rooms.

Those with walking difficulties are advised to ask for a room on a lower floor as it's an old building - it's been very well restored, but it does have many stairs and there are no lifts. As a previous guest, I was given one of the best rooms at the top of an adjoining building. The views were fabulous but, to reach the restaurant (which I could see from my window) I had to walk down five flights of stairs, across a courtyard, then walk another five flights of stairs up another building - and vice versa to return to my room afterwards! A zip wire from my room to the restaurant would have been useful!

Previous Next Table of contents

I loved accompanying you on your morning walk - the light in your photos is just perfect!